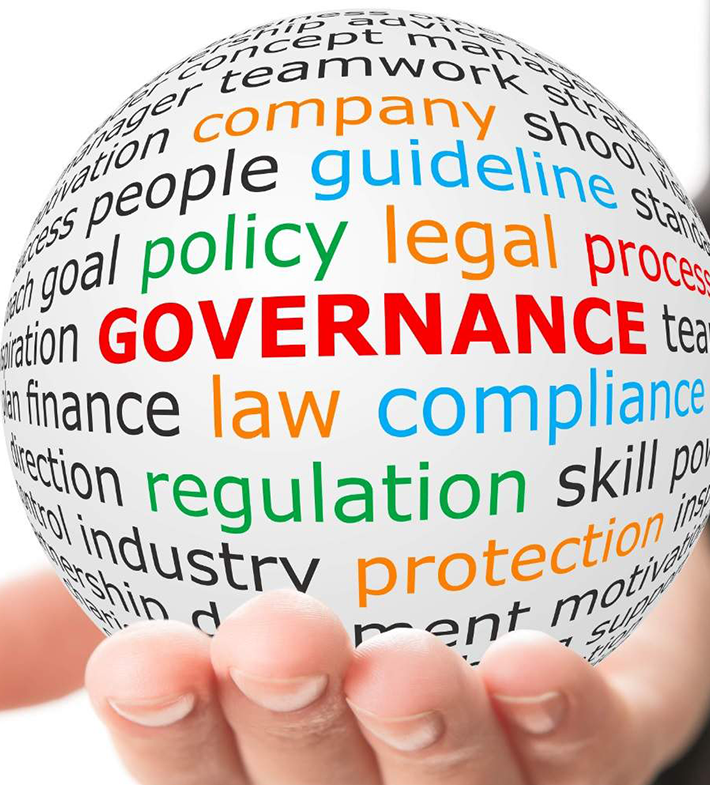 The concept of global governance is contested in a number of areas: its meaning, its prescriptive merit, and its political viability.  It does not mean ‘world government’ in a federalist sense, but rather a global framework of coordination among international organizations, national governments, civil society and the private sector, with the United Nations playing a central role. An exploration of the idea of global governance, and in particular global constitutionalism, can be found in a range of modern authoritative studies, most particularly:

Two journals directly related to the subject are:

The relationship between global governance and the principle of national sovereignty is perhaps the single most critical, and contentious, issue of the modern era.  The UN Charter opens in the name of ‘We the Peoples of the United Nations’ yet its first principle is the sovereign equality of its 193 member states which act on their behalf. This is explored in the following books:

In 1995, the Commission on Global Governance submitted a report to the UN Secretary-General on the subject. Its observation on the relationship is perhaps the most insightful made to date: “Sovereignty has been the cornerstone of the inter-state system. In an increasingly interdependent world, however, the notions of territoriality, independence, and non-intervention have lost some of their meaning. In certain areas, sovereignty must be exercised collectively, particularly in relation to the global commons”.  Our Global Neighbourhood, Commission on Global Governance (OUP, Oxford; 1995), p. 337 The idea of collective sovereignty for the global commons is pursued further in the Global Sustainability Programme section. The UN Secretary-General The role of the UN Secretary-General has been a major focus in studies on global governance.  Among the most authoritative studies of this subject, there are the following:

The Responsibility to Protect Probably the most important issue that highlights the relationship between global governance and national sovereignty concerns the right, and/or the responsibility, of the UN to intervene in an internal issue of a member state on grounds of civilian protection. In 2001, the International Commission on Intervention and State Sovereignty submitted its seminal report, The Responsibility to Protect. The Report effectively reformulated the meaning of state sovereignty for the modern age, contending that sovereignty entails not only state rights but state responsibility, especially the protection of its own citizens from major violations of human rights.  If a state proves unable or unwilling to protect its own citizens in this respect, the responsibility to do so falls, in the second instance, to the international community, including the right to intervene with force under a UN Security Council mandate. The R2P doctrine has been endorsed by the UN General Assembly (World Summit Outcome Document, A/RES/60/1, Sept. 2005), and appears in certain Security Council decisions and resolutions. The Centre’s International Advisory Panel member, Prof Ramesh Thakur, who was a member and principal author of the 2001 report, has written several books on the topic;

The idea of responsibility to protect is explored further in the Global Security Programme section. Multi-level jurisdiction Many experts maintain that the ‘dilemma’ of global governance is rendered less challenging if the conceptual framework is re-focused on the more legal, and less political, concept of ‘multi-level jurisdiction’: the idea that legitimate governance is ensured so long as the scale of the institutional response is commensurate with the scale of the issue confronted.  This idea rests on, among other concepts, the principle of subsidiarity. Studies on this subject include the following:

Globalization Globalization is entirely different from the concept of ‘global governance’, but it does raise issues of governance of analysis and prescription. The effect of economic globalization on national sovereignty is also a major issue of debate.  A useful reference, for New Zealand, is the following:

World Order Closely related to ‘global governance’ is the concept of ‘world order’.  Two authoritative academic studies on this subject are:

The concepts of global governance and world order are separate and distinct from the broader notion of ‘world government’ (or ‘world federalism’).   The idea of world federalism dates back millennia in a theoretical sense, and several centuries in a structural sense (usually taken to commence with Kant’s Perpetual Peace, 1795).  A spate of interest and activity among theoreticians and civil society occurred in the 1920s and ‘40s, coincident with official planning for the League of Nations and the UN.  Modern studies include the following:

Most, almost all, of the studies emerge from, and reflect, a Western liberal worldview.  Few studies can be found emerging from China, Russia, the Arab world or Africa. Global governance and ‘disruptive technology’ Many experts in both governmental and corporate worlds are warning that, in addition to the challenges confronting global security and global sustainability, the phenomenon of ‘disruptive technology’ is a third existential risk facing humanity in the 21st c. (see the Introductory section on Global Studies).  As Harari notes: The revolutions in information technology and biotechnology are still in their infancy … the technological revolutions will gather momentum in the next few decades, and will confront humankind with the hardest trials we have ever encountered.” 21 Lessons for the 21st Century, Y. Harari (Jonathan cape, London; 2018), p. 17.   The ability of the United Nations and its member states to handle this with due foresight, is very much an open question. A useful study on this issue is:

All UN bodies are working to ensure that AI is properly handled.  The two principal bodies have recently published studies on the subject:

The Centre has been active in the area of global governance.  It adopts no policy positions on the question of global governance (or global citizenship or law), other than encouraging rigorous research and reasoned debate on the subject; each Board member is entitled to advance personal judgement and opinion in their writing and presentations. Several of the Centre’s annual lectures have focused on this subject (see the Annual Lectures and Research sections for more detail):

Global Governance: The three branches of government Studies of global governance raise the question of the role of the legislative branch of governance in addition to the executive and judiciary. At present, the UN and Bretton Woods systems focus exclusively on the executive and judiciary.  The legislative branch of governance is to be found separately in the form of the Inter-Parliamentary Union (IPU) in Geneva.  A movement exists for a UN Parliamentary Assembly, and this has attracted some academic focus. Board chairman, Ass Prof Graham Hassall, has written on this in the 2017 Policy Quarterly: 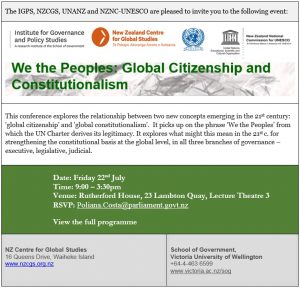